Children’s Spy Books with a Difference!

Do you know your Morse code from your shift cipher? Your International phonic alphabet from your NATO phonic alphabet? Discover the spy community’s many secret codes and join American Intelligence Agent, Major Jack Strong in tracking down and destroying ‘Stealth’, an evil organisation planning to take over the world!

Global Intelligence Organisation (G.I.O.) is a fictional organization that protects global security. Major Jack Strong is one of the most senior members and in ‘Venom Rising’ and ‘Vipers’ Nest’ he takes the reader on a white knuckle ride that requires him/her to crack numerous codes and ciphers. Throughout his assignments, Major Strong is relying on the support and assistance of the reader to infiltrate and destroy the enemy mission control website and save the world.

‘Venom Rising’ and Vipers’ Nest’ are written in a dossier-style narrative by real spy, under-cover agent Gary Murray. As the books unravel readers will find themselves immersed in exciting events including martial arts tournaments, surveillance, penetrating secret bases, aeroplane and helicopter operations, plus shoot-outs and interrogations.

Author Gary Murray is a former Armed Forces Special Investigator and Counter-intelligence Operative. Gary holds black belts in judo, karate and ju-jitsu and teaches martial arts to children aged 8 years and above. He has written several books and made over 200 major television contributions, including BBC TV’s Secret Society and ITV’s famous Cook Report. 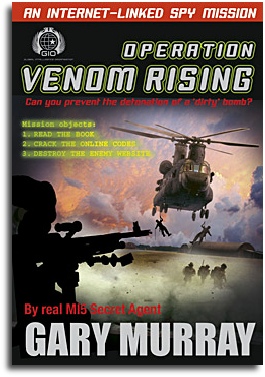